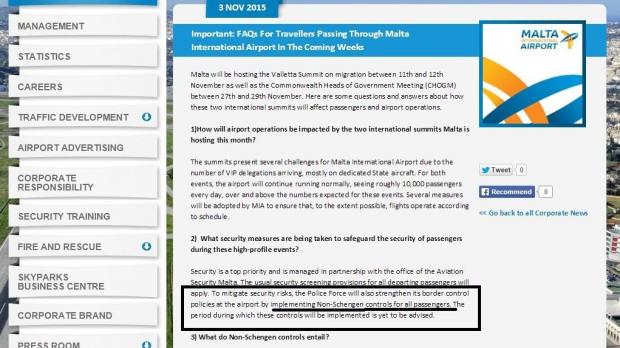 Malta will be temporarily suspending participation in the Schengen agreement between midnight and December 3 re-imposing border controls for all passengers, sources told timesofmalta.com.

The agreement is being suspended as a security measure in view of the Valletta Migration Summit being held on November 11 and 12 and the Commonwealth Heads of Government meeting between November 27 and 29.

The government said this afternoon however, that the Schengen arrangements were currently still in force.

It said that a decision on the suspension, as had happened when the Pope last visited Malta, had to go through a process including at European level.

The government said that once a decision was taken, the government would issue an official statement with the exact dates and the necessary arrangements for travellers.

The sources timesofmalta.com that new infrastructure including desks and terminals to process passports had already been set up at the airport.

Moreover, there order for police and immigration officers were on stop leave because of the suspension. The same officers were also advised they would have to work overtime.

Notice on the MIA and Virtu Ferries websites also states that immigration control due to CHOGM was being reintroduced between tomorrow and December 3 on both arrivals and departures from Malta.