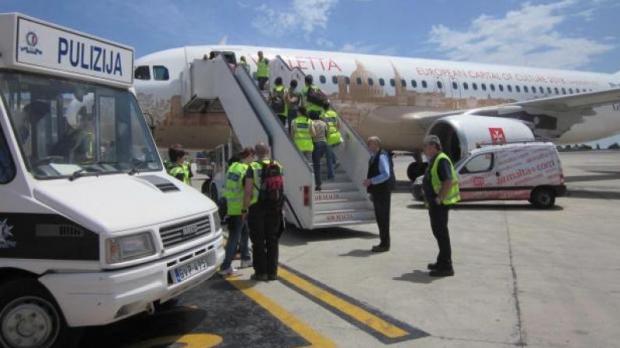 Migrants being repatriated from Malta.

European and African leaders want different things from next week’s migration summit in Malta, as the EU lowers its humanitarian ambitions.

The African states will be pushing for more legal migration channels to the EU. But EU negotiators, led by Pierre Vimont, the former head of the EU diplomatic service, are more interested in implementation of existing readmission agreements to help send people back, according to Brussels-based European Voice.

“There is no secret that the Africans are looking for opportunity for legal migration, work permits and these kinds of things, while the Europeans are focusing more on returns and readmission”, one EU official told the website.

A series of four draft summit conclusions, leaked over the past few weeks, show progressive watering down of EU proposals on legal intakes.

The Valletta priority areas are: development, legal migration and mobility; international protection and asylum; fight against irregular migration, smuggling, and trafficking of human beings; and returns and readmissions.

The latest draft text, dated Monday, calls for doubling, by 2017,of  the number of scholarships for African students and academic staff under the EU’s Erasmus programme.

But it focuses on how to keep people out, European Voice said.

It proposes enhancing “operational police cooperation and exchange of information between countries of origin, transit, and destination of migration with immediate effect”.

It also calls for improving intelligence gathering and sharing among African states, plus supporting “national capabilities to control land, sea and air borders, as well as maritime surveillance capabilities.”

A previous draft spoke of creating “centres [in Africa] for potential asylum seekers where, after pre-screening, they could benefit from safe and legal ways to the EU.”

But the 26 October text speaks, more vaguely, of plans to “explore the concept of enhanced capacities in priority  regions along the main migratory routes, with a view to  developing possible pilot projects.”

Most of the 28 EU leaders will meet in Valletta, with some 35 African heads of state for a two-day event.

On the EU side, all except Poland and Portugal, given their recent elections, have confirmed attendance.

On the African side, Sudan’s president Omar al-Bashir, who is facing war crimes charges, is sending his foreign minister.

The African Union delegation, which is also taking part, will be chaired by another bogeyman, Zimbabwean president Robert Mugabe.

Prime Minister Joseph Muscat in comments earlier this month said a focus of the summit would be on a mechanism to reward those countries which cooperated int he readmission of migrants.